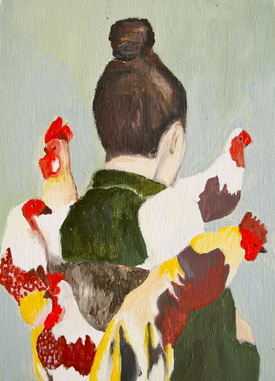 "Housecoat with Chickens" Oil on Wood Lisa Palladino
Lisa Palladino was born in 1970 in Kansas City, Kansas. She spent six weeks there and up until she was 18 did not live in the same city for more than 3 years. Having gone to 13 different schools before age 16, she experienced painting and drawing as a constant.

During college she became friends with one of the child subjects of Robert Mapplethorpe’s controversial photographs, Jesse McBride. She was introduced to McBride’s mother, Clarissa Dalrymple, an independent art curator credited with ‘discovering’ Matthew Barney, Ashley Bickerton, Collier Schorr among others.  It was this encounter that expanded Lisa’s understanding of the art world in New York and which led her to enrolling at the San Francisco Art Institute for her MFA. She spent many years producing art, (primarily oil paintings), as well as teaching painting and drawing to children for 5 years before embarking on a different pursuit.

In 2002, she began studying psychology and gained her PhD. Currently, she works in private practice as a psychologist in Ojai, CA.