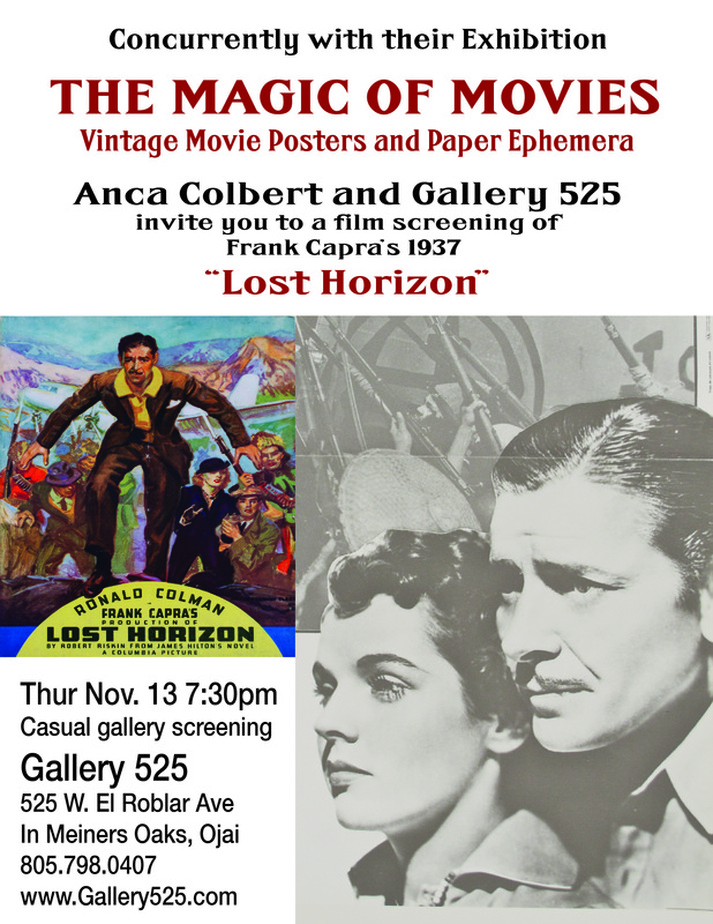 The gallery will be open on Thursday for its regular hours from 2 to 7pm.
Guests for the screening are welcome to arrive starting at 7pm.
There will be some light refreshments available before the screening.

THE MAGIC OF MOVIES, Vintage Movie Posters and Paper Ephemera runs through Nov. 29 at the gallery.

"It is a widespread belief that the Ojai Valley was used for filming the outside scenes of Shangri-La in Frank Capra’s classic “Lost Horizon.” But was it? Is it fact, fiction or film lore? Shangri-La is a fictional mountain valley described by James Hilton in his 1933 novel “Lost Horizon,” from which the movie was derived.

It is documented that Frank Capra and his crew started filming “Lost Horizon” in March 1936 and came to the valley shortly after. It is reputed that the establishing shot of Shangri-La was filmed as a sweeping view of the Ojai Valley from Dennison Grade. The original “final cut” of the film premiered in New York in 1937, but a questionnaire filled out by the viewers concluded that it was too long. The film was subjected to numerous edits, cut from 132 minutes to 95 minutes. Movie experts agree that somewhere in that process, the Ojai scene was edited out. Indeed, there seems to be no trace of the Ojai vistas in the film versions available to contemporary cinephiles."