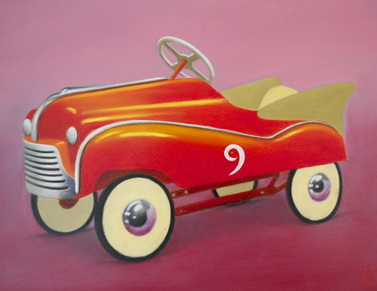 Rick Monzon was born in 1953 in Chula Vista, California near San Diego. Early years were spent in suburban Los Angeles where in 1961 his family moved to a new housing tract named Brighton Hills that in later years became the subject for a series of paintings with suburbia becoming a major theme in his work.

In 1967 his family moved to the San Francisco East Bay with its oak trees and gentle rolling hills. He sees his love of landscape painting as the direct influence of his years living there. Attending San Francisco’s Academy of Art and later Pasadena’s Art Center College of Design he pursued a direction of illustration and commercial art. Settling in Los Angeles he worked through the 70s and 80s for many publications and entertainment agencies.

During this time he started painting and networking among other artists, eventually becoming a part of the burgeoning downtown LA art loft scene. As an emerging artist he was chosen to appear in the influential publication New American Paintings attracting the attention of more established galleries and redirecting his focus to fine art. His work is now represented in numerous galleries, in film, print and television and in collections both public and private around the world.

In 2003 Rick, Lisa and son Ray relocated to the beautiful Ojai Valley near Santa Barbara. His work continues to evolve, always open to the mysterious and unpredictable flow of life.