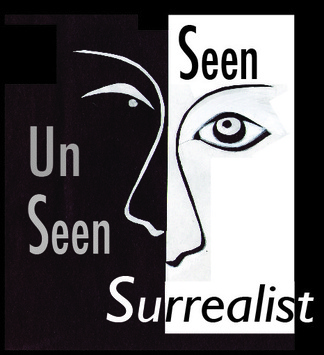 Visual truth as we know it is toyed with and re-examined by seven artists, altering our normal perceptions to reveal more than meets the eye in the Seen/Unseen Surrealist exhibition at Gallery 525, Ojai April 10 - May 4.

Using his primitive yet expressionist style, John Aaron puts us in the middle of a primeval dreamscape and drops us into a luminous, yet decidedly twilight zone.

Carmen Abelleira juxtaposes scale, objects and vignettes in a non-sensical, yet narrative fashion pulling on collective childhood memories while stepping on relationship nerves, all within natural settings and domestic environments that console on one hand and threaten on another.

One enters and sits right down on the surrealist pillow in Kelly Luscombe Bea’s paintings and hinged-door mixed media constructions that employ images of faces, figures and objects, giving privy to psychological states and scenes behind doors.

In her paintings and mixed media retablos, Dianne Bennett takes us into beyond-real forests, terrains and grids coded with signs and symbols, led by brainy guides, who happen to be the closest living relatives of dinosaurs on the planet.

In his other-worldly photographs created by projecting or drawing images onto the human body, R. Lane Clark brings us into a world of beauty on the cataclysmic edge between this world and the next, imbuing a chrysalis-like sense of transformation and emergence from one state to the other.

Combining vintage photographs and manuscripts with mixed media in surprising ways, Jane Handel strips meaning back to reveal poetic undercurrents that speak to humor, ironies of life and oftentimes exposures of injustice.

Jacqueline Woods alters vintage photographs, deftly exchanging genders in the found portraits she chooses so seamlessly that it causes double-takes.  Her work juxtaposes images in startling and surprising ways, bringing us to question our assumptions about identity

Curatorial Statement
By stripping ordinary images of their usual order and significance and combining elements not normally found together, illogical and surprising effects emerge that mix up and redefine meaning.  In this way, compelling images are created that go beyond what the eye is used to in the everyday and new mental connections are made, allowing the viewer to see the world with new eyes.  Such expanded perceptions assist in cognating the unseen, and what formerly existed in interior landscapes, emotional states, visions, dreams and thought-worlds only, can now be grasped and seen.   Kelly Luscombe-Bea

dreams
visions
internal dialogues
mystical and non-ordinary states
humor/irony underneath the surface
narratives telling the real story of what is really going on in a situation that isn’t initially apparent
begging to be expressed
truth
mental and emotional states
duality
there and not there
not immediately obvious but that which finally hits you between the eyes
stories that need telling that were suppressed
real story
hunches
flash of intuition
that which is undisclosed and is yet to be unraveled
unraveled
mystery
omens & messages that only we know picked up from symbols, objects, signs
signs meant for us that no one else would put meaning together from
right underneath the surface
above and below the surface
details, aspects that weren’t noticed on first glance
double take
what's really happening
not obvious
subtle worlds
subtleties
subterfuge
truth/untruth
between the lines
subtext
seeing through things
hidden desires
what wasn't seen but was there, sensed through feelings or other perceptions
the clues from unseen make discoveries into true reality
something ordinary that is non-ordinary
states of being beyond objective reality
the threshold line between life and death, this world and the next