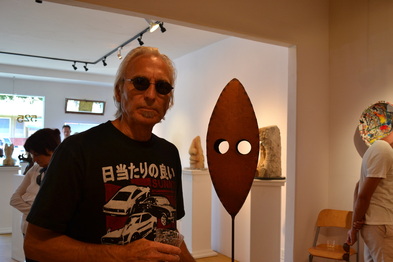 Chris Engle's introduction to the arts began at the age of 5 with his first painting (actually finger painting).  In junior and senior high school he found refuge from the academic courses by immersing himself in all the art and shop classes he could enroll in.  His favorite medium was construction and asemblage.  Having been exposed fo fine art by his mother (an accomplished watercolorist), and being taught welding by his father (a mountain climber and grocer), he built many constructions from materials he found rusting away in the Pacific Northwest from where he hails.  Many of these constructions still  litter the grounds of the family home.


Upon the advice of many, who assured him that art could be a rewarding and fulfilling career, he went on to college in Hawaii.  Once he had taken the courses he felt would be appropriate to this career, he left school to join the ranks of diswashers, busboys and the unemployed.


After 20 years of living in Los Angeles and collecting experience, inspiration and parking tickets, Mr. Engle found his soul mate, married and set up a new home together where they emjoy an artist's lifestyle (long on time off, short on money).


Drawing on influences from mid-century America, the Space Program, automotive design and popular culture, Mr. Engle attempts to alter the course of reality and perhaps change the world.


His work has been shown regionally and some pieces have made their way into various collections.


He lives with his wife, artist Dianne Bennett, in Meiners Oaks, California.